“Injury is a leading cause of the global disease burden, accounting for 10 percent of all deaths worldwide. Despite 90 percent of these deaths occurring in low and middle-income countries (LMICs), the majority of trauma research and infrastructure development has taken place in high-income settings. Furthermore, although accessible services are of central importance to a mature trauma system, there remains a paucity of literature describing the spatial accessibility of emergency services in LMICs. Using data from the Service Provision Assessment component of the Demographic and Health Surveys of Namibia and Haiti we defined the capabilities of healthcare facilities in each country in terms of their preparedness to provide emergency services. A Geographic Information System-based network analysis method was used to define 5- 10- and 50-kilometer catchment areas for all facilities capable of providing 24-hour care, higher-level resuscitative services or tertiary care.

“Traditional methods for monitoring influenza are haphazard and lack fine-grained details regarding the spatial and temporal dynamics of outbreaks. Twitter gives researchers and public health officials an opportunity to examine the spread of influenza in real-time and at multiple geographical scales. In this paper, we introduce an improved framework for monitoring influenza outbreaks using the social media platform Twitter. Relying upon techniques from geographic information science (GIS) and data mining, Twitter messages were collected, filtered, and analyzed for the thirty most populated cities in the United States during the 2013–2014 flu season. 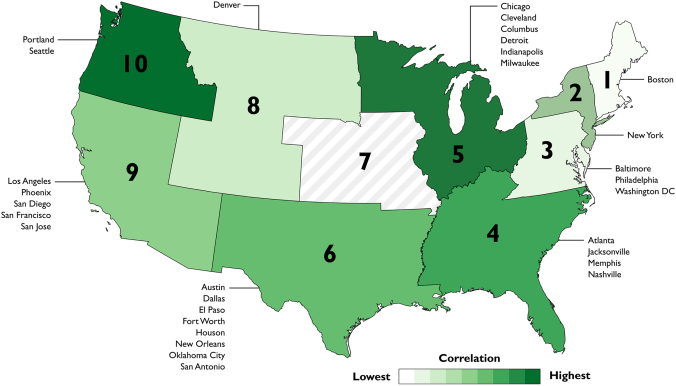 “The results of this procedure are compared with national, regional, and local flu outbreak reports, revealing a statistically significant correlation between the two data sources. The main contribution of this paper is to introduce a comprehensive data mining process that enhances previous attempts to accurately identify tweets related to influenza. Additionally, geographical information systems allow us to target, filter, and normalize Twitter messages.”

Background
“Dengue virus (DENV) transmission is spatially heterogeneous. Hence, to stratify dengue prevalence in space may be an efficacious strategy to target surveillance and control efforts in a cost-effective manner particularly in Venezuela where dengue is hyperendemic and public health resources are scarce. Here, we determine hot spots of dengue seroprevalence and the risk factors associated with these clusters using local spatial statistics and a regression modeling approach.

“From August 2010 to January 2011, a community-based cross-sectional study of 2012 individuals in 840 households was performed in high incidence neighborhoods of a dengue hyperendemic city in Venezuela. Local spatial statistics conducted at household- and block-level identified clusters of recent dengue seroprevalence (39 hot spot households and 9 hot spot blocks) in all neighborhoods. However, no clusters were found for past dengue seroprevalence. Clustering of infection was detected at a very small scale (20-110m) suggesting a high disease focal aggregation. Factors associated with living in a hot spot household were occupation (being a domestic worker/housewife (P = 0.002), lower socio-economic status (living in a shack (P<0.001), sharing a household with <7 people (P = 0.004), promoting potential vector breeding sites (storing water in containers (P = 0.024), having litter outdoors (P = 0.002) and mosquito preventive measures (such as using repellent, P = 0.011). Similarly, low socio-economic status (living in crowded conditions, P<0.001), having an occupation of domestic worker/housewife (P = 0.012) and not using certain preventive measures against mosquitoes (P<0.05) were directly associated with living in a hot spot block.

Conclusions/Significance
“Our findings contribute to a better comprehension of the spatial dynamics of dengue by assessing the relationship between disease clusters and their risk factors. These results can inform health authorities in the design of surveillance and control activities. Focalizing dengue control measures during epidemic and inter-epidemic periods to disease high risk zones at household and neighborhood-level may significantly reduce virus transmission in comparison to random interventions.”

“Aedes mosquitoes capable of transmitting Zika and other viruses are likely to live year-round across many tropical areas in the Americas, Africa, and Asia. Our map provides an enhanced global projection of where vector control initiatives may be most valuable for reducing the risk of Zika virus and other Aedes-borne infections.”

“In support of a multiagency project for assessing induction hazards, we present maps of extreme-value geoelectric amplitudes over about half of the continental United States. These maps are constructed using a parameterization of induction: estimates of Earth surface impedance, obtained at discrete geographic sites from magnetotelluric survey data, are convolved with latitude-dependent statistical maps of extreme-value geomagnetic activity, obtained from decades of magnetic observatory data. Geoelectric amplitudes are estimated for geomagnetic waveforms having 240 s sinusoidal period and amplitudes over 10 min that exceed a once-per-century threshold.

Maps showing synthetic geoelectric amplitudes at EarthScope and U.S. Geological Survey sites for (a) north-south and (b) east-west geomagnetic induction with an amplitude of b(ω) = 1 nT and at period T = 2π/ω = 240 s. Constructed using the methods of Bedrosian and Love [2015, Figure 4].

“The common practice adopted in previous attempts on Satellite Derived Bathymetry (SDB) has been to calibrate a single set of coefficients using global regression model. In this study we propose an Adaptive Geographically Weighted Regression (A-GWR) model that takes into account local factors in determining the regression coefficients. A-GWR model is examined as an effective solution for addressing heterogeneity and could provide better water depth estimates in near-shore region. The study has been carried out for a 30 km stretch and covers 160 km2 of a complex near-shore coastal region of Puerto Rico, Northeastern Caribbean Sea. Medium resolution (Landsat-8) and high resolution (RapidEye) images were used to estimate water depth. Results demonstrate that the A-GWR model performs well in estimating bathymetry for shallow water depths (1 to 20m), showing the correlation coefficient (R) of 0.98 and 0.99, determination coefficient (R2) of 0.95 and 0.99 and Root Mean Square Error (RMSE) of 1.14m and 0.4m) for Landsat-8 and RapidEye respectively. The data processing workflow has been entirely implemented in an Open Source GIS environment and can be easily adopted in other areas.”

“Background: Neural tube defects (NTDs) are congenital birth defects that occur in the central nervous system, and they have the highest incidence among all birth defects. Shanxi Province in China has the world’s highest rate of NTDs. Since the 1990s, China’s government has worked on many birth defect prevention programs to reduce the occurrence of NTDs, such as pregnancy planning, health education, genetic counseling, antenatal ultrasonography and serological screening. However, the rate of NTDs in Shanxi Province is still higher than the world’s average morbidity rate after intervention. In addition, Shanxi Province has abundant coal reserves, and is the largest coal production province in China. The objectives of this study are to determine the temporal and spatial variation of the NTD rate in rural areas of Shanxi Province, China, and identify geographical environmental factors that were associated with NTDs in the risk area.

“Results: In both Heshun County and Yuanping County, the incidence of NTDs was significantly (P<0.05) reduced after intervention. The results from spatial analysis showed that significant spatial heterogeneity existed in both counties. NTD clusters were still identified in areas close to coal sites and main roads after interventions. This study also revealed that the elevation, fault and soil types always had a larger influence on the incidence of NTDs in our study areas. In addition, distance to the river was a risk factor of NTDs in areas close to the coal sites and main roads.

“Conclusion: The existing interventions may have played an important role to reduce the incidence of NTDs. However, there is still spatial heterogeneity in both counties after using the traditional intervention methods. The government needs to take more measures to strengthen the environmental restoration to prevent the occurrence of NTDs, especially those areas close to coal sites and main roads. The outcome of this research provides an important theoretical basis and technical support for the government to prevent the occurrence of NTDs.”

“Background: No study has been conducted to investigate the spatial pattern and association of socioeconomic status (such as income) with breast and colorectal cancer incidence in Texas, United States. This study aimed to determine whether median household income was associated with the risk of developing breast and colorectal cancer in Texas and to identify higher cancer risks by race/ethnicity and geographic areas.

Methods:This was a retrospective cohort study with an ecological component in using aggregated measures at the county level. We identified 243,677 women with breast cancer and 155,534 men and women with colorectal cancer residing in 254 counties in Texas in 1995–2011 from the public-use dataset of Texas Cancer Registry. The denominator population and median household income at the county level was obtained from the U.S. Bureau of the Census. Cancer incidence rates were calculated as number of cases per 100,000 persons and age-adjusted using the 2000 US population data. We used the ArcGIS v10.1 (geographic information system software) to identify multiple clustered counties with high and low cancer incidences in Texas.

Conclusions: This study demonstrated that higher income was associated with an increased risk of breast cancer and a decreased risk of colorectal cancer in Texas. There were geographic variations with cancer incidence clustered in high risk areas in Texas. Future studies may need to explore more factors that might explain income and cancer risk associations and their geographic variations.”

“As climate change unfolds, weather systems in the United States have been shifting in patterns that vary across regions and seasons. Climate science research typically assesses these changes by examining individual weather indicators, such as temperature or precipitation, in isolation, and averaging their values across the spatial surface. As a result, little is known about population exposure to changes in weather and how people experience and evaluate these changes considered together. Here we show that in the United States from 1974 to 2013, the weather conditions experienced by the vast majority of the population improved.

“Using previous research on how weather affects local population growth to develop an index of people’s weather preferences, we find that 80% of Americans live in counties that are experiencing more pleasant weather than they did four decades ago. Virtually all Americans are now experiencing the much milder winters that they typically prefer, and these mild winters have not been offset by markedly more uncomfortable summers or other negative changes. Climate change models predict that this trend is temporary, however, because US summers will eventually warm more than winters. Under a scenario in which greenhouse gas emissions proceed at an unabated rate (Representative Concentration Pathway 8.5), we estimate that 88% of the US public will experience weather at the end of the century that is less preferable than weather in the recent past. Our results have implications for the public’s understanding of the climate change problem, which is shaped in part by experiences with local weather. Whereas weather patterns in recent decades have served as a poor source of motivation for Americans to demand a policy response to climate change, public concern may rise once people’s everyday experiences of climate change effects start to become less pleasant.”

“The result shows that simple Kriging method gave the best fit. The analysis of spatial and temporal variability suggest that the nugget effects from 2001 to 2013 were increasing, which means the spatial correlation weakened gradually under the influence of human activities. The spatial variability in the middle areas of the alluvial–proluvial fan is relatively higher than area in top and bottom. Since the changes of the land use, groundwater level also has a temporal variation, the average decline rate of groundwater level between 2007 and 2013 increases compared with 2001–2006. Urban development and population growth cause over-exploitation of residential and industrial areas. The decline rate of the groundwater level in residential, industrial and river areas is relatively high, while the decreasing of farmland area and development of water-saving irrigation reduce the quantity of water using by agriculture and decline rate of groundwater level in agricultural area is not significant.”