“During the 1964 Great Alaska earthquake (MwMw 9.2), several fjords, straits, and bays throughout southern Alaska experienced significant tsunami runup of localized, but unexplained origin. Dangerous Passage is a glacimarine fjord in western Prince William Sound, which experienced a tsunami that devastated the village of Chenega where 23 of 75 inhabitants were lost – the highest relative loss of any community during the earthquake. Previous studies suggested the source of the devastating tsunami was either from a local submarine landslide of unknown origin or from coseismic tectonic displacement. Here we present new observations from high-resolution multibeam bathymetry and seismic reflection surveys conducted in the waters adjacent to the village of Chenega. The seabed morphology and substrate architecture reveal a large submarine landslide complex in water depths of 120–360 m. 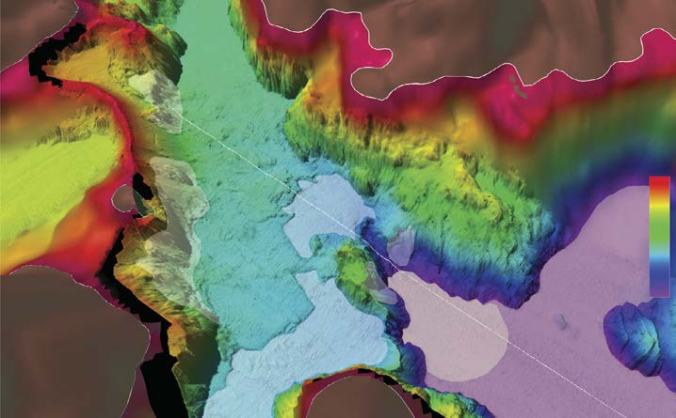 “Analysis of bathymetric change between 1957 and 2014 indicates the upper 20–50 m (∼0.7 km3) of glacimarine sediment was destabilized and evacuated from the steep face of a submerged moraine and an adjacent ∼21 km2 perched sedimentary basin. Once mobilized, landslide debris poured over the steep, 130 m-high face of a deeper moraine and then blanketed the terminal basin (∼465 m water depth) in 11±5 m11±5 m of sediment. These results, combined with inverse tsunami travel-time modeling, suggest that earthquake-triggered submarine landslides generated the tsunami that struck the village of Chenega roughly 4 min after shaking began. Unlike other tsunamigenic landslides observed in and around Prince William Sound in 1964, the failures in Dangerous Passage are not linked to an active submarine delta. The requisite environmental conditions needed to generate large submarine landslides in glacimarine fjords around the world may be more common than previously thought.”