By Lenka Kociánová and Rostislav Melichar

“This paper describes Orientation Analysis Tools (OATools), a new add-in, which has been developed for ArcGIS software (ESRI) to allow the spatial analysis of structural data. These tools bring a complex approach to structural data analysis that highlights the spatial aspect of oriented data. In this paper we introduce the functionality of this add-in, which allows users to plot selected data in azimuthal projection, calculate and plot fold axes, construct density distribution diagrams and rose histograms, and create maps of spatial averages and fold axes. 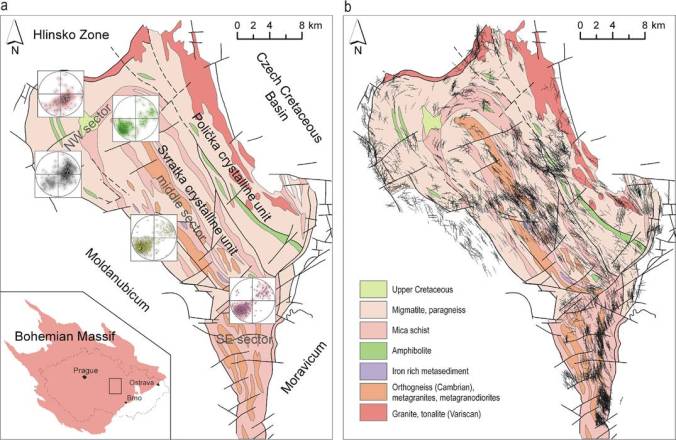 “There is a link between projections and maps; therefore, it is possible to select point data in the projection and see their location on the map, and vice versa. Practical use of these tools is demonstrated in a case study of the Svratka and Polička crystalline units (Eastern margin of the Bohemian Massif, Czech Republic), where a large dataset was collected. Using OATools the structural conditions were explored. Major changes in foliation dip directions were detected and the axial surfaces of the folds were determined. We also demonstrate the benefit of applying these tools, together with the potential of GIS with respect to spatial data queries, storage, and visualization.”

3 thoughts on “OATools: An ArcMap add-in for the orientation analysis of geological structures”