“Population growth will result in a significant anthropogenic environmental change worldwide through increases in developed land (DL) consumption. DL consumption is an important environmental and socioeconomic process affecting humans and ecosystems. Attention has been given to DL modeling inside highly populated cities. However, modeling DL consumption should expand to non-metropolitan areas where arguably the environmental consequences are more significant. Here, we study all counties within the conterminous U.S. and based on satellite-derived product (National Land Cover Dataset 2001) we calculate the associated DL for each county. By using county population data from the 2000 census we present a comparative study on DL consumption and we propose a model linking population with expected DL consumption. 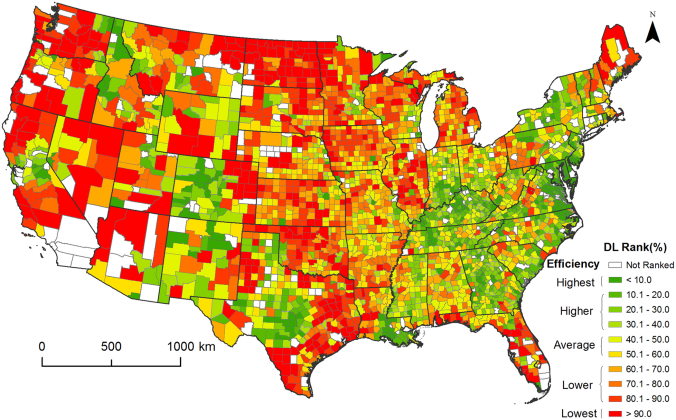 “Results indicate distinct geographic patterns of comparatively low and high consuming counties moving from east to west. We also demonstrate that the relationship of DL consumption with population is mostly linear, altering the notion that expected population growth will have lower DL consumption if added in counties with larger population. Added DL consumption is independent of a county’s starting population and only dependent on whether the county belongs to a Metropolitan Statistical Area (MSA). In the overlapping MSA and non-MSA population range there is also a constant DL efficiency gain of approximately 20km2 for a given population for MSA counties which suggests that transitioning from rural to urban counties has significantly higher benefits in lower populations. In addition, we analyze the socioeconomic composition of counties with extremely high or low DL consumption. High DL consumption counties have statistically lower Black/African American population, higher poverty rate and lower income per capita than average in both NMSA and MSA counties. Our analysis offers a baseline to investigate further land consumption strategies in anticipation of growing population pressures.”