“Background
Hemorrhagic fever with renal syndrome (HFRS) is endemic in mainland China, accounting for 90% of total reported cases worldwide, and Jiangsu is one of the most severely affected provinces. In this study, the authors conducted GIS-based spatial analyses in order to determine the spatial distribution of the HFRS cases, identify key areas and explore risk factors for public health planning and resource allocation.

Methods
Interpolation maps by inverse distance weighting were produced to detect the spatial distribution of HFRS cases in Jiangsu from 2001 to 2011. Spatio-temporal clustering was applied to identify clusters at the county level. Spatial correlation analysis was conducted to detect influencing factors of HFRS in Jiangsu. 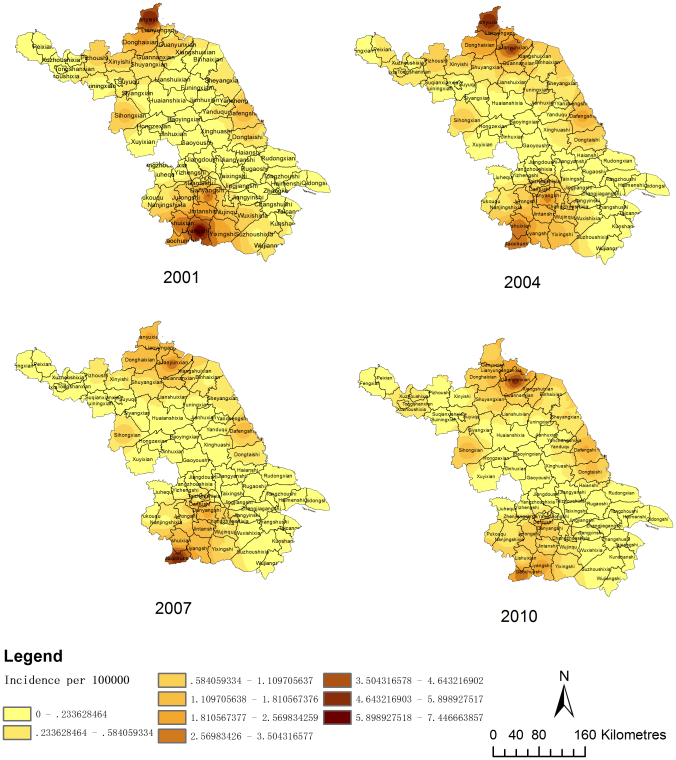 Results
HFRS cases in Jiangsu from 2001 to 2011 were mapped and the results suggested that cases in Jiangsu were not distributed randomly. Cases were mainly distributed in northeastern and southwestern Jiangsu, especially in Dafeng and Sihong counties. It was notable that prior to this study, Sihong county had rarely been reported as a high-risk area of HFRS. With the maximum spatial size of 50% of the total population and the maximum temporal size of 50% of the total population, spatio-temporal clustering showed that there was one most likely cluster (LLR = 624.52, P<0.0001, RR = 8.19) and one second-most likely cluster (LLR = 553.97, P<0.0001, RR = 8.25), and both of these clusters appeared from 2001 to 2004. Spatial correlation analysis showed that the incidence of HFRS in Jiangsu was influenced by distances to highways, railways, rivers and lakes.

Conclusion
The application of GIS together with spatial interpolation, spatio-temporal clustering and spatial correlation analysis can effectively identify high-risk areas and factors influencing HFRS incidence to lay a foundation for researching its pathogenesis.”

2 thoughts on “The Spatial Analysis on Hemorrhagic Fever with Renal Syndrome in Jiangsu Province, China Based on Geographic Information System”