By A. Johnston, P. Slovinsky, and K.L. Yates

“Sea level rise and climate change will have widespread impacts on coastal towns and cities, many of which have seen dramatic increases in development over recent decades. In addition to potential private property damage, the critical public infrastructure that supports these regions will become increasingly vulnerable to coastal flooding. This paper describes a straightforward, structured methodology for identifying and prioritizing critical infrastructure vulnerabilities in the coastal community of Scarborough, Maine, USA. The study uses GIS mapping and analysis techniques to identify infrastructure vulnerabilities in a coastal town under three different potential future flooding scenarios. A simple multi-criteria analysis matrix is used to explore the often hard to quantify, multifaceted consequences of infrastructure loss. Numerical scores are attributed to represent the economic, social, health and safety and environmental impacts of coastal flooding, allowing vulnerable locations to be ranked in order of overall importance. 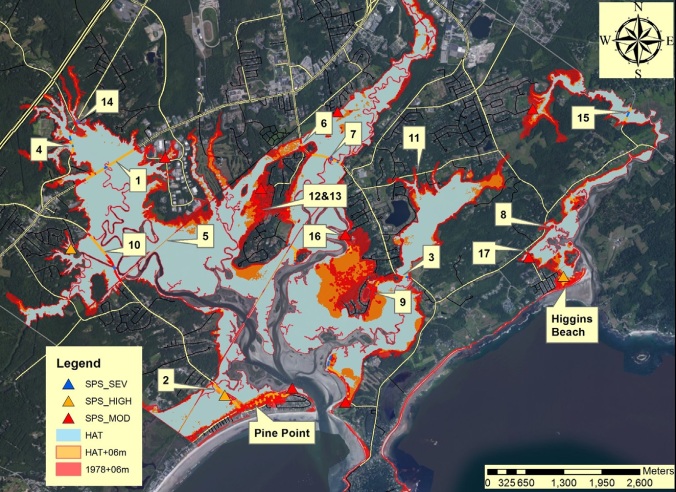 “The results are summarized in a series of tables, maps and data sheets that convey data in readily accessible formats. High traffic roads, including evacuation routes, and major utility corridors are identified as the most critical vulnerable infrastructure assets in the town. Targeted improvements are recommended in these critical areas to improve system and community resilience to climate change and sea level rise. Our approach makes use of standard techniques, requires limited data and is therefore readily transferable for use in infrastructure planning in other similar communities. The methodology encourages public engagement and education, and the results can be used by the local authorities to pursue external funding opportunities to support investment in proactive infrastructure adaptation. The identification of key system weaknesses will allow future infrastructure investment to be targeted to the most critical areas, and assist in improving emergency response plans.”

“The state of Goa in West India has a 105 km long coastline with beaches and cultural heritage sites of significant importance to tourism. The increasing incidence of tropical cyclones in the Arabian Sea in recent decades and the devastating impacts of the December 2004 tsunami in India stressed the importance of assessing the vulnerability of coastal areas to flooding and inundation, notably in view of climate change induced sea-level rising (SLR). This study aims to develop a Coastal Vulnerability Index (CVI) for the state of Goa and to use this index to examine the vulnerability of the different administrative units of the state, known as talukas. This is accomplished by using seven physical and geologic risk variables characterising the vulnerability of the coast, including historical shoreline change, rate of relative sea-level change, coastal regional elevation, coastal slope, mean tidal range, significant wave height, and geomorphology using conventional and remotely sensed data, in addition to two socio-economic parameters: population and tourist density data.

Areas of high, medium, and low risk based on the coastal regional elevation parameter.

“Using a composite CVI based on those relative risk variables, each of the seven coastal talukas was categorised according to its vulnerability. The resulting vulnerability map depicts the talukas that are the most and least vulnerable to erosion, flooding and inundation of coastal lands, and that the inclusion of socio-economic parameters influences the overall assessment of vulnerability. This study provides information aimed at increasing awareness amongst decision-makers to deal with disaster mitigation and coastal zone management, and is a first step towards prioritising areas for climate change adaptation in view of the projected SLR and increased storminess.”