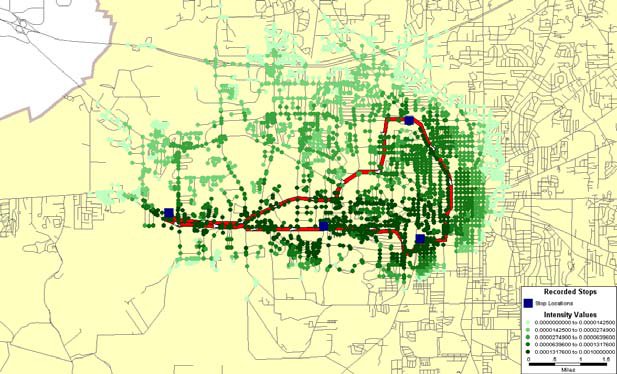 “The present paper explores a new direction for TGDE, namely the creation of a densitybased accessibility measure for mobile objects. Related to time geography, accessibility measures have also garnered widespread attention in the literature (Kwan 1998; Miller 1999; O’Sullivan et al. 2000; Yu and Shaw 2008; Delafontaine et al. 2012). Our new metrics gauge how accessible a moving object is to particular opportunities of interest, given the constraints inherent to its movement plan. Thus, we are able not only visualize where the object most likely could have been (Downs and Horner 2012), but we also capture the configuration and magnitude of activities relative to its travel path from both a visual and analytic perspective.”