“Objective: To evaluate the association between proximity to a health center and early childhood mortality in Madagascar, and to assess the influence of household wealth, maternal educational attainment, and maternal health on the effects of distance. 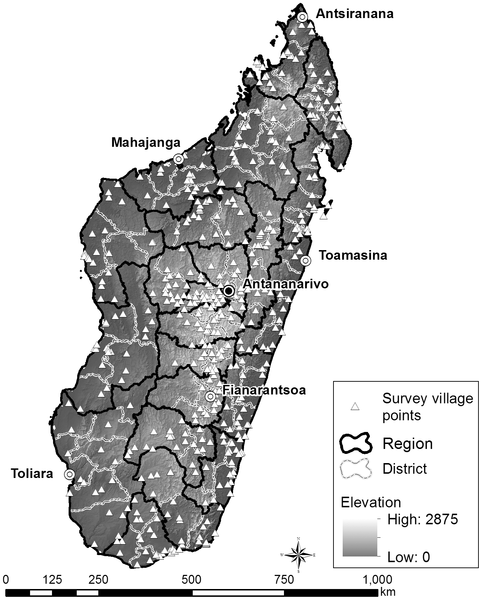 A map of Madagascar indicating the survey points for the 2008–2009 Demographic and Health Survey (EDSMD-IV).

“Methods: From birth records of subjects in the Demographic and Health Survey, we identified 12565 singleton births from January 2004 to August 2009. After excluding 220 births that lacked global positioning system information for exposure assessment, odds ratios (ORs) and their 95% confidence intervals (CIs) for neonatal mortality and infant mortality were estimated using multilevel logistic regression models, with 12345 subjects (level 1), nested within 584 village locations (level 2), and in turn nested within 22 regions (level 3). We additionally stratified the subjects by the birth order. We estimated predicted probabilities of each outcome by a three-level model including cross-level interactions between proximity to a health center and household wealth, maternal educational attainment, and maternal anemia.

“Conclusions: Our study suggests that distance from a health center is a risk factor for early childhood mortality (primarily, infant mortality) in Madagascar by using a large-scale nationally representative dataset. The accessibility to health care in remote areas would be a key factor to achieve better infant health.”

“Incompatible land-use and land-cover indicate the trend in territorial planning and generate instability and conflicts leading to degradation in terms of environmental quality. Urban landscape structure of Bucharest suburban area has changed lately, especially due to expansion of residential areas, increasing the risks of a chaotic urban development. The consequences of this residential expansion have led to malfunctions, outlining a disadvantage area due to environmental problems. In this context, residential areas are frequently located in the proximity of gas stations in Bucharest suburban area. This paper presents the relation between residential areas and gas stations in order to evaluate causes that led to their proximity.

“Results have pointed out using a number of 60 gas stations (21 gas stations in residential areas and 39 in non-residential areas) the causes and the temporal dynamics of locational conflicts, suggesting that unplanned development and residential agglomeration are the main consequences of territorial conflicts. In this respect of incompatible land-use and land-cover expansion, it is required an evaluation and hierarchy in order to start new coherent plans of space development.”