“The disciplines of the plant sciences and geography have been intertwined as far back as circa 300 BCE when the Greek scholar Theophrastus, frequently referred to as the “Father of Botany,” described the habitat and geographical distribution of plants in his first work on the subject titled Enquiry into Plants (Historia Plantarum). It wasn’t until the sixteenth century and the establishment of the world’s first botanical garden in Padua, Italy, that the leading icon of modern geography, the map, found its permanent place in the plant sciences by documenting the locations of woody plants in the garden for identification purposes. Today, location—the unifying theme of geography— has taken on an even more important role in the plant sciences where it is considered an essential attribute to record, and variable to consider, for the study of plants in fields ranging from agriculture to ecology. 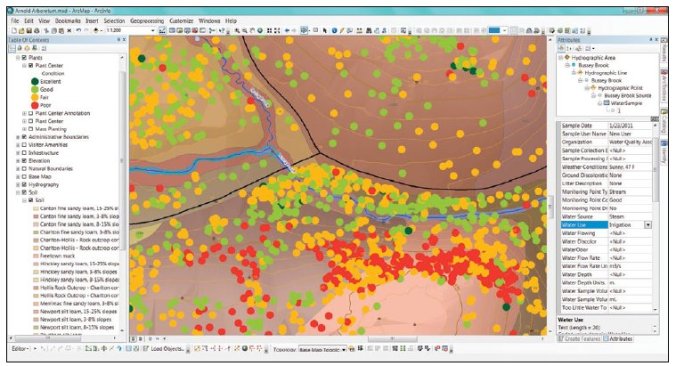 Analysis of plant condition at the Arnold Arboretum reveals a cluster of plants in poor condition (indicated by red dots), in this case mostly eastern hemlocks (Tsuga canadensis) damaged by hemlock wooly adelgids.

“In the digital age that we live in, the cataloging of plants and the analysis of the influence that location plays on the growth and distribution of them is increasingly performed using geographic information systems (GIS). GIS is commonly defined as a system of personnel, computer hardware, software, and data for capturing, managing, analyzing, and displaying all forms of geographically referenced information. GIS merges the visual aspects of a map with the analytical power of a database, and allows plant scientists to view, question, understand, interpret, and visualize data in many ways that reveal relationships, patterns, and trends in the form of maps, globes, reports, and charts. In our rapidly changing world, GIS gives scientists the power to quickly understand and formulate solutions to the problems presented by our most complex issues such as population growth, resource consumption, and climate change.”