“Multi-touch interaction has become popular in recent years and impressive advances in technology have been demonstrated, with the presentation of digital maps as a common presentation scenario. However, most existing systems are really technology demonstrators and have not been designed with user requirements in mind.

Interaction on the useTable (tangible)

“This paper will report on ongoing activities in a user centred approach to the use of large multi-touch displays to support disaster managment applications. Building on the detailed analysis of user requirements in real-world tasks, the focus is on the design of presentation and interaction styles that exploit the potential of large scale multi-touch displays to reduce cognitive workload while monitoring the impacts on usability and ergonomics, including a study of the potential physiological dangers involved in long-term use.”

Diverse spatial statistics were performed to evaluate clustering of infection at different spatial scales. Results were discussed in the light of the data availability and of the geographical scale analysed. Secondly, the Part II Report presents the results of temporal trend analysis of Salmonella in laying hens from 2004 to 2006 using the statistical packages R and Stata. The same modelling approaches (design-based and generalised estimating equations) were applied as previously in the Part I Report using the SAS System. Additionally, analysis of temporal patterns was also carried out applying random effect models using the SAS System. Results obtained using different software and methodological approaches were in agreement. Suggestions for minimum sample sizes and number of time points needed for identifying trends of zoonotic agents in the European Union are also provided.” 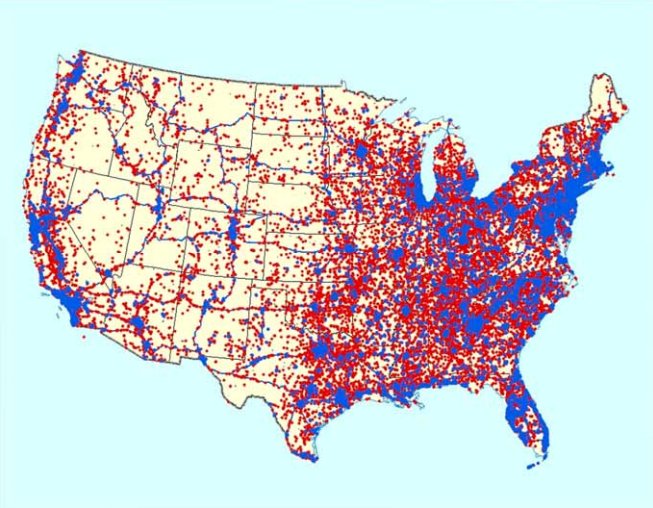 Location of Fatal Crashes in the United States

“Recent examples of analysis at NHTSA will be used to illustrate these ideas. The objective of the workshop is to facilitate discussions on ideas related to regional analysis based on the national analysis initiatives at NHTSA.”

“Many situations in hydraulic engineering require the use of numerical modelling. Developments in this field began about 50 years ago and the resulting computational codes have now reached maturity. A current trend (not restricted to hydraulics) consists in global modelling and building Decision Support Systems. This necessitates taking into account a large number of phenomena and often presupposes coupling appropriate computational codes. Moreover, many models have been built in recent years but this requires much time and effort since whole rivers (and sometimes their tributaries) are often under consideration. So, when undertaking a new study, the reuse of existing models considerably reduces engineering time. The possible lack of information in an existing model can be compensated for by coupling it to another model, thereby giving access to the missing information. This study investigates the available techniques for coupling hydraulic models with different spatial dimensions (1D and 2D). An easy-to-use framework, called PALM, is compared to the other existing tools, and adopted for further study. The way to perform coupling of existing and relatively complex code in such a framework is detailed. We focuss on the reduced invasivity of PALM, which makes it very convenient for algorithm testing and prototyping. Results on real-world hydraulic cases are shown, in order to demonstrate the performance of this approach, compared to less accurate coupling, based on file exchange for example.”

The California Chapters of the Urban and Regional Information Systems Association (URISA) and the California Geographic Information Association (CGIA) are pleased to announce the 18th Annual California GIS Conference, to be held April 11-13, 2012 at the Sheraton Sacramento. The theme of CalGIS 2012 is Capitalizing on Spatial Technology. Abstracts will be accepted and significant early registration discounts are available through October 3, 2011.

The educational program is developed through a review of submissions received through the Call for Abstracts. The committee welcomes the submission of individual papers, posters, complete sessions, and lightning talks and has proposed a list of suggested categories for consideration:

Abstracts will be accepted and significant early registration discounts are available through October 3, 2011. Visit http://www.calgis.org for conference details.