AgroAtlas is a new interactive website that shows the geographic distributions of 100 crops; 640 species of crop diseases, pests, and weeds; and 560 wild crop relatives growing in Russia and neighboring countries. Downloadable maps and geographic information system (GIS) software are also available, allowing layering of data, such as that relating major wheat production areas to concentrations of Russian wheat aphids. 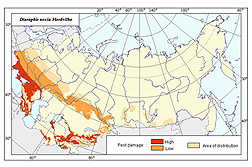 ARS and St. Petersburg State University have partnered on AgroAtlas, a new website that offers geographic distributions of 100 crops; 640 crop diseases, pests, and weeds; and 560 wild crop relatives in Russia and neighboring countries such as this map showing the distribution of the Russian wheat aphid.

Greene leads the AgroAtlas project with Alexandr N. Afonin, a senior scientist with St. Petersburg State University in Russia. The Internet-based map is the successful result of a proposal they submitted in 2003 for funding under a program coordinated by the ARS Office of International Research Programs (OIRP) in Beltsville, Md., and supported by the U.S. Department of State.

In September 2010, the two researchers joined their colleagues to host the first of a series of 10-day workshops in St. Petersburg teaching the use of GIS software to scientists and students from former Soviet states. OIRP also awarded scholarships supporting travel and lodging expenses for 20 students to learn about AgroAtlas and GIS software. They, in turn, were to return to their institutes to train others.

Demonstrations of AgroAtlas include showing where in Crimea, a major wine-producing region, U.S. wine grapes can be successfully grown, as well as the distribution of major wheat diseases in the North Caucasus region according to agroclimatic zones. Greene notes AgroAtlas also has potential to aid in the detection and identification of insect pests, pathogens or weeds that have entered—or could enter—the United States from Russia or neighboring countries.

Read more about this research in the March 2011 issue of Agricultural Research magazine.