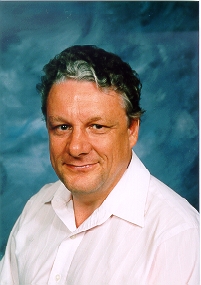 Q: At the Friday morning closing session of the 2010 ESRI International User Conference, Scott Morehouse invited you on stage for a few minutes to share your experience that week.  Can you share that experience again?

A: Well I already knew a lot about what was going to happen before the User Conference had even started, because I’d worked closely with Jack Dangermond on a paper a couple of months prior to the Conference, and I’d also worked closely with Clint Brown and Scott Morehouse before that.  But when I saw it all come together on Monday at the plenary session, somehow the neurons got connected in my mind and I sent a message to my staff back in Austin—get me an iPad!—while the plenary session was going on.  I now have an iPad.

By Tuesday, the impact of what was happening at the conference was overwhelming, and I went into kind of a vision-lock.  All these ideas were competing in my mind, and I was sitting in a Conference session and suddenly I realized, I’m still carrying a plastic bag.  What is this?  It’s my laundry!  I came out of my hotel room with my laundry bag and suddenly I went into vision-lock and I forgot all about my laundry!

It took me awhile to process it through, but by Thursday, in the Water Resources User Group, I gave a talk on implementing Jack’s vision in Hydro.  I’ve attended the ESRI User Conference 21 years in a row, and I’ve been teaching the Hydro seminar since 1994.  And the 2010 User Conference was by far the most important to me ever.  And why this is so important is because water changes with time.  Because of this, it’s been so inconvenient to deal with it in a GIS framework.  At least up until now.

I woke up Friday morning of the User Conference, and I realized, this is a fundamental change in science.  The implications are just immeasurable.  I don’t think we know where the limit of them is.  And it took me all week to process what happened to reach that conclusion.

Q: You call this a fundamental change in science.  Can you explain in more detail exactly what you mean by that?

A: What’s happened is that time and space have come together—space-time.  Now, that’s been true in science for some time, because you could have spatially continuous arrays like time-varying sea surface temperatures and so on.  But it’s not been true in GIS.  So the fundamental breakthrough here in geographic information science is representing space-time processes on discrete spatial objects.  And that’s a fundamentally new thing that’s not been possible or accessible before.

Q: From a personal perspective, how is this going to change the way you do research?

A: What it means is that we can really bring water into GIS.   We can study the properties of water itself as they vary in space and time, and not just the watersheds, rivers, and aquifers through which water flows.  That is so important for better understanding how water impacts human life and sustains living communities.   Access to water information through the iPad and iPhone are also breakthroughs – water information everywhere, all the time!   Water is so vital to people and we are bringing knowledge of water closer to them.

Dr. David R. Maidment is the Hussein M. Alharthy Centennial Chair in Civil Engineering and the Director of the Center for Research in Water Resources at the University of Texas at Austin.  He can be reached at maidment@mail.utexas.edu.