He Says the Concept Enables Architects, Urban Planners, and Others to Design with Nature and Geography in Mind

Dangermond introduced the audience to the concept of GeoDesign, which in simple terms means designing with nature in mind by integrating geospatial technologies into the design process. This gives architects, urban planners, and others the geographic information and analysis they need to design well.

“Japan is famous for the master designers who harmonized the use of land and structures with the environment around them, finding the right balance between building and nature,” Dangermond said. “Contrast this with the sprawling, monotonous suburbia so familiar today. It’s a kind of crime against nature.”

Dangermond joined a roster of diverse and influential speakers at the Technology, Entertainment, Design (TED) conference, February 10–13. TED is a private, nonprofit foundation that hosts conferences to explore and promote what its Web site says are “ideas worth spreading.”

A landscape architect by training, Dangermond founded ESRI in 1969 with a vision that computer mapping and analysis could help people design a better future. Under Dangermond’s leadership, that vision has continued to guide ESRI in creating cutting-edge geographic information system (GIS) and GeoDesign technologies used in many industries to make a difference worldwide. 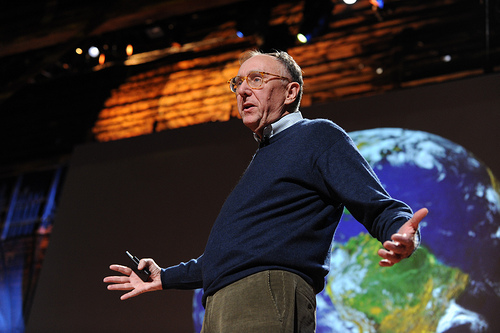 A student of the influential landscape architect Ian McHarg, Dangermond praised McHarg’s pioneering concepts in ecological planning and explained how those ideas mirrored those put into practice by the Japanese master designers.

Dangermond said he believes that designing with nature, or GeoDesign, with all the best geospatial technology behind it, is the next evolutionary step in the design field.

“GeoDesign is both an old idea and a new idea. It reopens our minds and hearts; it puts in our hands the means to achieve what the Japanese masters did so many years ago—designing with geographic knowledge, thus living harmoniously with nature.”