Based around the theme GIS: Extending the reach, the conference program will consist of four streams, with presentations from ESRI and ESRI Australia technology specialists demonstrating how the latest location intelligence solutions are making it easier to extend the reach of GIS.

The conference will also include a broad range of presentations from organisations across the Asia Pacific region discussing and demonstrating how the reach of GIS has been extended geographically, technically, or externally.

There will also be plenty of opportunities for networking, as well as preconference workshops and training and an extensive trade exhibition area.

…and free GIS Day buttons, too! 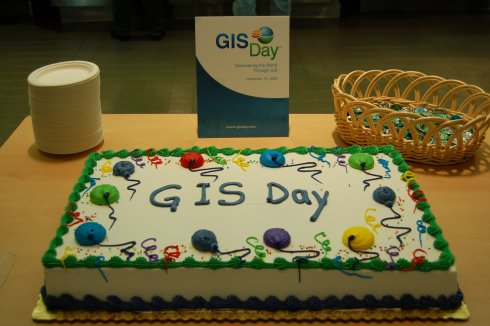 Are you bored working on Open StreetMap?  Are you submitting basemap corrections to Google and increasingly finding yourself thinking “there has to be more to life than this”?  Well NASA has a new way for you to volunteer your time to not just make the world a better place, but make the solar system a better place.

NASA and Microsoft Corp. of Redmond, Wash., have collaborated to create a Web site where Internet users can have fun while advancing their knowledge of Mars.

Drawing on observations from NASA’s Mars missions, the “Be a Martian” Web site will enable the public to participate as citizen scientists to improve Martian maps, take part in research tasks, and assist Mars science teams studying data about the Red Planet.

“We’re at a point in history where everyone can be an explorer,” said Doug McCuistion, director of the Mars Exploration Program at NASA Headquarters in Washington. “With so much data coming back from Mars missions that are accessible by all, exploring Mars has become a shared human endeavor. People worldwide can expand the specialized efforts of a few hundred Mars mission team members and make authentic contributions of their own.”

Participants will be able to explore details of the solar system’s grandest canyon, which resides on Mars. Users can call up images in the Valles Marineris canyon before moving on to chart the entire Red Planet. The collaboration of thousands of participants could assist scientists in producing far better maps, smoother zoom-in views, and make for easier interpretation of Martian surface changes.

By counting craters, the public also may help scientists determine the relative ages of small regions on Mars. In the past, counting Martian craters has posed a challenge because of the vast numbers involved. By contributing, Web site users will win game points assigned to a robotic animal avatar they select.

With a common goal of inspiring digital-age workforce development and life-long learning in science, technology, engineering and mathematics, NASA and Microsoft unveiled the Web site at the Microsoft Professional Developers Conference in Los Angeles this week. The site also beckons software developers to win prizes for creating tools that provide access to and analysis of hundreds of thousands of Mars images for online, classroom and Mars mission team use.

“Industry leaders like NASA and Microsoft have a social responsibility as well as a vested interest in advancing science and technology education,” said Walid Abu-Hadba, corporate vice president of the Developer and Platform Evangelism Group at Microsoft. “We are excited to be working with NASA to provide new opportunities to engage with Mars mission data, and to help spark interest and excitement among the next generation of scientists and technologists.”

To encourage more public participation, the site also provides a virtual town hall forum where users can expand their knowledge by proposing Mars questions and voting on which are the most interesting to the community. Online talks by Mars experts will address some of the submitted questions. Other features include interactive tools for viewing Martian regions and movies about people who study Mars in diverse ways.

“Mars exploration inspires people of all ages, and we are especially eager to encourage young people to explore Mars for themselves,” said Charles Elachi, director of NASA’s Jet Propulsion Laboratory in Pasadena, Calif. “We are delighted to be involved in providing the creative opportunity for future explorers to contribute to our understanding of Mars.”

“The beauty of this type of experience is that it not only teaches people about Mars and the work NASA is doing there, but it also engages large groups of people to help solve real challenges that computers cannot solve by themselves,” said Marc Mercuri, director of business innovation in the Developer and Platform Evangelism Group at Microsoft.

The Mars Exploration Program is managed by JPL for NASA’s Science Mission Directorate in Washington.

To enroll as a virtual Martian citizen and start exploring, visit http://beamartian.jpl.nasa.gov

“Determining when and where a flood may strike can be difficult. But the US Geological Survey is working on a new technology that could make the task much more accurate and easier for the public to recognize the danger spots.

“During last season’s flood her apartment complex was a different story.”

In honor of GIS Day, I pulled out the oldest issue of ArcNews I could find and am posting a copy here.  Of course, it was still just the “ESRI Newsletter” back in the Fall of 1986…I think the name changed to “ARC/NEWS” in early 1987.

Read about the new “ARC Macro Language (AML)” coming in ARC/INFO Rev. 4.0…what the more than 300 (!) attendees at the 1986 User Conference learned…new ESRI staff (many of them still here, 23 years later)…how “Licensees receive (ETAK) MAPBASE files on a 9-track tape, 1600 or 6250 bpi, which can be read directly into ARC/INFO using a single command”…and so much more.

The Fall 1986 issue of the ESRI Newsletter is 12 pages long.  Click on a thumbnail below to view a larger version of the page. 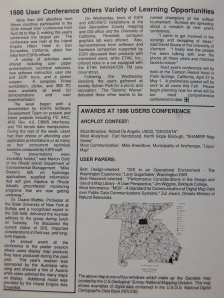 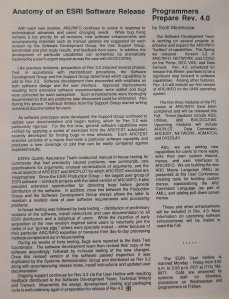 “The calculation of variations in the sea level is relatively simple. It is by far more complicated to then determine the change in the water mass. A team of geodesists and oceanographers from the University of Bonn, as well as from the GFZ German Research Centre for Geosciences and the Alfred-Wegener Institute for Polar and Marine Sciences, two centres of the Helmholtz Association, have now, for the first time succeeded in doing this. The researchers were able to observe short-term fluctuations in the spatial distribution of the ocean water masses. Their results are, amongst others, important for improved climate models.

“In order to determine the ocean volume in a certain region, one only needs to know, in addition to the topography of the seabed, the height of the sea level. For this purpose, researchers have long been resorting to gauging stations and satellite altimetric procedures. The ocean mass depends, however, not only on the volume, but also on the temperature and on the salt content. Water expands when heated. Warm water, thus, weighs less than the same quantity of cold water.”

“Happy GIS Day! Hello Friends – Wishing you all a good day today. If you know a geographer, wish them a good week, as this is Geography Awareness Week. If you know a GIS Professional, wish them a Happy GIS Day. We held a GIS Day event off the coast of Newport Beach, CA today, and there are a few pictures and some video on the blogsite, linked below.  “Think Beyond Plastic” Expedition is going well with less than a week to go.

“Think Beyond Plastics Info. We are in our third week now! Picking up tons of trash!

“We have an interactive map, in its basic form now – test it out and see what you think. http://thegisinstitute.org -Thanks to all who have helped get this project up and going, and especially for those of you who have donated this week. We need all the support we can get, so please read the blog, and consider donating to help us map AND clean-up the oceans.

“We believe adventure is present in all GIS endeavors. The GIS Institute strives to build community by bringing education, work, and service to the conservation GIS community.

“As shown here, none of the monitors in the Houston area met the 2008 8-hour ozone standard of 0.075 ppm. Ozone design values range from 0.076 ppm at Lake Jackson in southwestern Brazoria County to 0.096 ppm at Bayland Park west of downtown and the Ship Channel. The higher ozone concentrations in the western part of Houston are supported by the predominance of east sector wind flow on the highest ozone concentration days.

“The ozone layer protects Earth from harmful ultraviolet solar radiation. Ozone is a gas made of three oxygen atoms, and just like any other gas it circulates in the atmosphere. During the fall months, chemical reactions combine with circulation patterns high in the atmosphere to reduce the concentration of ozone over Antarctica. Areas with ozone concentrations less than 220 Dobson Units are called “holes” in the layer. NOAA’s polar orbiting satellites are used to monitor the ozone hole and the data taken from the POES satellites over the past year is show in this animation. In 2009, the ozone hole reached its 10th largest measured size since careful measurements began in 1979. It appears, though, that the ozone hole is repairing itself after passage of the Montreal Protocol in 1989 that banned the use of ozone-depleting compounds such as chlorofluorocarbons(CFC’s) and hydrofluorocarbons (HFCs).”