ESRI Press Book Delves into the Beginning of GIS

Harvard University students in Cambridge, Massachusetts, today meet in the basement of Memorial Hall for a drink, a bite to eat, and perhaps a jazz concert. But for a generation of some of the most respected leaders in the GIS field, the legacy of the subterranean retreat now known as Loker Commons belongs not to burgers and beer but to computer mapping software. 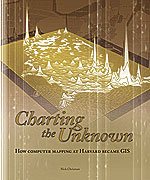 Memorial Hall was where retired Chicago architect Howard Fisher established the Harvard Laboratory for Computer Graphics in 1965 with a Ford Foundation grant. From the depths of the basement offices came pioneering computerized mapping and geospatial analysis programs, such as SYMAP, SYMVU, POLYVRT, and ODYSSEY, that were produced by some of the smartest people working in computer programming, geography, cartography, and other disciplines.

“It was a group of people who were very bright, motivated, and in the early stages of a whole new field of computer graphics and geographic information systems,” said Bruce Rowland, an ESRI manager and former student at the Lab, during a taped interview with Nick Chrisman. Chrisman is the author of Charting the Unknown: How Computer Mapping at Harvard Became GIS, a new book and CD published by ESRI Press.

In Charting the Unknown, Chrisman, a programmer and research associate at the Lab from 1972 to 1982, turns the clock back to the early 1960s when computer mapping was in its infancy. He follows the progress of the technology, with an emphasis on Harvard’s contributions.

During a recent interview, Chrisman talked about how determined he and his colleagues at the Lab were to improve computer mapmaking and how their passion for the work coalesced at Harvard.

“It was the opportunity to make a difference,” said Chrisman, who prior to taking the position at Harvard worked on such projects as making a computer map that showed segregated housing in Boston in 1971 for a group involved in the school busing issue. “We knew that . . . if we could get everything to work, we were going to get somewhere. Harvard provided us with a place of leverage.”

Charting the Unknown, which comes with an accompanying CD, describes in detail how the Lab was founded; the staff projects, including the early SYMAP software and GIS prototype ODYSSEY; and the reasons behind the Lab’s closure in 1991. The CD’s video clips feature interviews of former Lab staffers, including former Lab director Allan Schmidt, Graphic Systems president Eric Teicholz, ESRI director of software development Scott Morehouse, and ESRI president Jack Dangermond. Their recollections, coupled with Chrisman’s painstaking archival research, provide insights into the early systems and software used to create maps and show how sheer determination and a love of computer mapmaking helped spur GIS pioneers to create smarter solutions.

In Charting the Unknown, Chrisman describes how Fisher caught the computer mapping bug in 1963 while taking a short course taught by Edgar Horwood, a professor of urban planning and civil engineering at the University of Washington. “As soon as he saw Horwood’s maps, Fisher realized he could make better ones,” Chrisman wrote.

Fisher quickly hired a programmer, Betty Benson, to work on developing the computer mapping software program SYMAP. Then he launched a training course component to teach urban planners how to use it. His desire to get SYMAP into the hands of more map users, coupled with plans to reform thematic cartography, led him to pursue the Ford Foundation grant and a university research laboratory setting. The foundation gave $294,000 over three years to seed the Lab, which Harvard agreed to open. Fisher was appointed director.

The Lab initially focused on improving and selling SYMAP, which could produce conformant, proximal, and contour maps on a line printer and be used for a variety of projects, such as air pollution studies.

To an outsider, the Lab, which later expanded its role and name to become the Harvard Laboratory for Computer Graphics and Spatial Analysis, appeared to be a relative sea of calm during the late 1960s and early 1970s, a tumultuous time on college campuses with the anti-Vietnam War movement at its height. But the scene at the Lab was actually intense. The staff and students lived and breathed computer mapping, hunching over keypunch machines for countless hours creating the programs they used to make maps and create mapmaking software.

In a taped interview for the CD, Dangermond, a research assistant at the Lab from 1968 to 1969, describes burning the midnight oil programming the maps, keypunching at a machine, and then depositing decks of keypunched cards at the nearby Harvard Computer Center for processing. He said he thrived intellectually at the Lab and in his Harvard classes. “I think I learned more in that one year than I had learned in the previous 10 years in academic life,” said Dangermond. “You know when you drink seven cups of coffee how you feel? You are just hyper. Everything is magical, new, and exciting. It was, for me, like drinking out of a fire hose of knowledge.”

“What set the Lab apart from others experimenting with computer mapping in the 1960s was Fisher’s plan to sell the software developed,” Chrisman said.

Selling software then was a revolutionary idea, according to Chrisman. Sales in the mid-1960s focused on hardware, while software was often provided for free.

“The key difference for Howard Fisher’s Lab was that the software was going to be distributed to users,” Chrisman said. “[Some others] wanted to set up a service center. They wanted to be at the center of the network, and they wanted everyone to send their data into them and be processed at a central site.”

Customers snapped up SYMAP, along with SYMVU software, developed in 1969 to illustrate surface displays. The Lab also conducted correspondence courses, offering software discounts to people who earned certificates. Conferences about computer mapping brought together top professionals and students. Spatial analysis was folded into the mix at the Lab, and the staff worked on environmental planning projects with Harvard University’s Department of Landscape Architecture. In the meantime, the directorship of the Lab changed hands several times, Dangermond was getting ESRI off the ground, and the ODYSSEY system was being developed.

The ODYSSEY system was developed by a team that included Chrisman, Denis White, Scott Morehouse, and others starting in the mid-1970s. A vector GIS that provided spatial analysis, ODYSSEY became a prototype for modern GIS software. “ODYSSEY could overlay maps fast,” Chrisman said, citing a major advantage of the system. Together, the developers worked for years perfecting ODYSSEY for commercial distribution.

But in the early 1980s, Gerald McCue, then dean of Harvard’s Graduate School of Design, indicated he wanted to stop the Lab’s commercial distribution of software. The Lab was part of the Graduate School of Design. He believed the Lab, being in a nonprofit university setting, should focus on research rather than going into the business of selling software, Chrisman wrote.

The decision spelled the beginning of the end for the Lab and dashed some people’s hopes of reviving the Geography Department at Harvard University, which had closed in 1948, according to Chrisman. “[From] ’67 to ’81, we were basically the de facto program in geography,” said Chrisman.

Limited sales of software continued in the 1980s, mainly to universities. But the ODYSSEY team broke up. White went to work for the Environmental Protection Agency. Chrisman also charted a new course by earning a Ph.D. and becoming a college professor. Today he’s a professor of geomatics sciences at the Université Laval in Quebec City, Canada, and scientific director of the Geomatics for Informed Decisions (GEOIDE) Network.

By 1991, the staff had withered, and the Lab was no more. In an interview with Chrisman on the CD, Morehouse laments that Harvard decided against commercializing ODYSSEY. “On the other hand, it was a very difficult challenge. Could anybody have figured out how to take commercial software technology from a university setting to a commercial setting in 1979–1980?”

Chrisman concurs that the Graduate School of Design, while a good place for the Lab in the 1960s, never fully realized the software’s potential. However, the Lab’s spirit lives on in the people who took what they learned there and applied it to build even more sophisticated mapping systems and software.

“The work at the Laboratory was not in vain,” Chrisman wrote in his book’s postscript. “Many elements of the modern GIS emerged in this very special place. The human value nurtured by the Laboratory remains, a triumph of the best of the human spirit.”

This spring, Harvard University opened the Center for Geographic Analysis (CGA). Described as a technology platform in the Institute for Quantitative Social Science, the center’s staff will help on research projects and offer classes in geographic information systems and spatial analysis.

Chrisman hails the decision, while underscoring that the center’s mission focuses on education and research rather than what the Lab did, which was work on software development.

“For those of us who were at the Lab, it is gratifying to see Harvard finally get back into the game,” he said, adding that Harvard is going in a new direction. “It’s a totally different thing, and it’s much more related to the academic role of the institution,” Chrisman said. “It is not going to be the national center or the international center for new developments,” he added. “It’s going to take quite awhile before they would get to that stage, and it would be hard to do it.”

Watch interviews videotaped as part of the research for Charting the Unknown: How Computer Mapping at Harvard Became GIS.  The videotaped interviews reassemble some key members of the Laboratory’s staff.  The interviewees discuss important concepts and difficulties in the early technology.  Most importantly, despite the decades-long passage of time, the interviews capture the fascination of being present for the creation of a new technology–a true “charting of the unknown.”

3 thoughts on “Charting the Unknown: How Computer Mapping at Harvard Became GIS”