…from the Redlands Daily Facts…

“ESRI software is being used to track swine flu data.  National and local health departments, including the Centers for Disease Control and Prevention, have used the Redlands-based company’s geographic information systems technology to gauge concentrations of the H1N1 virus, which the CDC estimated Thursday has quadrupled in number of cases. “The mapping (tool) is very important to the general public and to professionals and researchers because this epidemic definitely has a geographic component and has spread, has concentrations,” said James Pick, a professor in the University of Redlands School of Business who teaches GIS and has studied mortality and disease in geographic regions.”

“Around the world, public health organizations at all levels of government and the partners that support them are responding to pandemic influenza. Infectious disease experts predicted a pandemic, saying it was not a question of if but when. They were right. Drawing on recent experiences with severe acute respiratory syndrome (SARS) and concerns over avian influenza (H5N1), the World Health Organization (WHO) and other health authorities urged nations and local governments to prepare pandemic influenza response plans. Many ministries of health (MOH) and subnational departments of health (DOH) around the world have activated those plans and are sharing data as required by the updated International Health Regulations (IHR).”

“ESRI believes that geographic accuracy is essential in detecting and responding to any infectious disease outbreak, whether it is pandemic influenza, seasonal influenza, or a local outbreak of food-borne illness. Based on extensive work with many DOHs in the United States, the U.S. Department of Health and Human Services (DHHS), and the Centers for Disease Control and Prevention (CDC); international public health organizations such as WHO, Pan American Health Organization (PAHO), and the European Centre for Disease Prevention and Control (ECDC); and numerous national MOHs and subnational DOHs on all continents, ESRI has identified the use of a geographic information system (GIS) as critical in

“The current pandemic presents a major opportunity to leverage ESRI’s global footprint in health GIS. Building on the experience and readiness of ESRI’s existing global user community will increase the likelihood that promising GIS practices are implemented in other jurisdictions. Leveraging ESRI’s global footprint in health GIS will also facilitate a seamless flow of geographically relevant data as a component of the response to pandemic influenza, from local to global levels. A compelling case exists for building on top of the health GIS that is already in place both in the United States and around the world.” 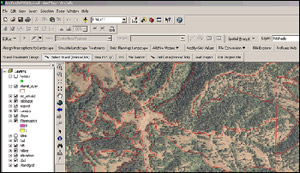 “ArcFuels is used to rapidly design and test fuel treatments at the stand and landscape scale via linkages to models such as FVS-FFE, SVS, FARSITE, FlamMap, Nexus, and FVS within a spatial interface. The system was specifically designed to accelerate Fireshed/SPOTS analyses for fuel treatment planning. The ArcMap framework helps specialists leverage local data to address project-specific issues that typify many fuel treatment projects.”

…from The Assam Tribune…

“Contrary to what a section of our experts has been claiming here, Japanese scientist Dr Shunji Murai, the present general secretary of the Asian Association of Remote Sensing (AARS) and a former president of the International Society for Photogrammetry and Remote Sensing (ISPRS), claimed here today that earthquakes can be predicted. Dr Murai, who is also Professor Emeritus of the University of Tokyo was making a presentation on the geospatial technologies and its trends at a two-day workshop. The Assam Remote Sensing Application Centre (ARSAC) of the Assam Science, Technology and Environment Council (ASTEC) and the Geoinformatics Center, Asian Institute of Technology (AIT), Bangkok have jointly organized the event.

Recent growth in the rings of bristlecone pines in the western U.S. points to warmer temperatures at treeline

Anyone who has ever cut down a tree is familiar with the rings radiating out from the center of a tree trunk marking the tree’s age. Careful study of tree rings can offer much more: a rich record of history and indications of concerns for the future. Researchers Matthew Salzer and Malcolm Hughes of the University of Arizona’s Laboratory of Tree-Ring Research and their colleagues have analyzed tree-rings from bristlecone pine trees at the highest elevations, looking for the reasons behind an extraordinary surge in growth over the past 50 years. Their findings appear in the Nov. 16 early online edition of Proceedings of the National Academy of Sciences.

The researchers studied bristlecone pines (Pinus longaeva) at three sites in California and Nevada, close to the upper elevation limit of tree growth. The tree-ring record showed wider rings in recent decades, indicating a surge in growth in the second half of the 20th century that was greater than at any time in the last 3,700 years.

“We’ve got a pretty strong pointer that temperature plays a part in this,” said Malcolm Hughes in describing the work. “So the puzzle is, why does it play a part in it for the trees near the treeline and not for those only 300, 400 feet lower down the mountain than them?”

To solve that puzzle, the research team took core samples, drawing from living and dead trees, which were well preserved in the cold, dry climate existing at the high elevation. They were able to chart ring width going back 4,600 years.

“We’re able to overlap the patterns from the dead wood with the inner part of the living trees, and that way move back in time, dating the samples as we go,” said Salzer.

They determined that fertilization from increased carbon dioxide in the atmosphere does not adequately explain this kind of growth at the upper-forest level. What they found was that the bristlecone pines at treeline grow faster when temperatures are warmer-in contrast to the trees lower down the mountain, which grow faster with higher amounts of precipitation and when temperatures are cooler. In other words, it’s the chilly mountaintop climate that has been limiting growth for these particular trees.

So, the researchers say, that strongly points to warmer temperatures as a cause of the recent surge in growth for bristlecone pines. This finding has implications that reach beyond the state of the trees.

“What it means for the mountains, and the mountain environment, is probably treeline will be moving up, and there are some indications of that occurring,” said Salzer. “Other animal and plant species will have to shift up to accommodate the changing conditions.”

There is the potential for impact on humans as well.

“High mountains are our water towers. That’s where we store water as snow through the winter,” said Hughes. “And if we reduce the fraction of year for which that water is there as snow rather than running straight down as rain or evaporating, then this has pretty serious consequences for our future water supplies.”

This work was supported by the National Science Foundation through its paleoclimatology program.

“Launched into Earth-orbit on May 4, 2002, the Atmospheric Infrared Sounder, AIRS, moves climate research and weather prediction into the 21st century. AIRS is one of six instruments on board the Aqua satellite, part of the NASA Earth Observing System. AIRS along with its partner microwave instrument, Advanced Microwave Sounding Unit (AMSU-A), represents the most advanced atmospheric sounding system ever deployed in space. Together these instruments observe the global water and energy cycles, climate variation and trends, and the response of the climate system to increased greenhouse gases.

This video demonstrates a component of a series of tools developed by the Redlands Institute at the University of Redlands, CA as part of a collaborative project with JPL to download, visualize, and analyze source AIRS satellite sounder data. The tools are developed on top of ESRI’s ArcGIS suite of GIS products utilizing ArcObjects. This video demonstrates the data loader component. This component allows the user to select a phenomenon, date range, and geographic extent to download. The tool then inteprets this query, finds the matching data files on an ftp site and downloads them. Once downloaded the HDF formatted data is processed and converted for display and analysis in ArcGIS.

These videos demonstrate the ArcScene version of the visualizer component.

These animations were created using the AIRS Granule Data Loader and Visualizer developed by The Redlands Institute in collaboration with JPL.

This video shows some sample outputs created by the AIRS Granule Data Loader and Visualizer.

“GIS is the nervous system for the planet.”

“Get Lost in Mapping: Find Your Place in the World

“Maps are all around us. New technologies like sophisticated satellite imagery and geographic information systems (GIS) have taken maps out of atlases and into the palm of your hand. Discover maps where you never expected to find them—GPS devices, online sites, news broadcasts, social networking, and maybe even your own phone.

“Teachers, take advantage of National Geographic’s Geography Action! program. This year, your students can build a free wall-sized map of Europe or America right in their own classroom.

“At home, get in the sprit of adventure and discovery by tuning into National Geographic Channel’s Expedition Week, starting November 15.”

“The Geostationary Operational Environmental Satellite (GOES) is one of NOAA’s most useful tools for understanding our planet. Situated 35,000km above the equator in outer space, the satellite provides a constant stream of data and imagery back to Earth as it observes clouds, ocean temperatures, winds, atmospheric properties, severe storm systems, fires and many other environmental parameters. NOAA uses two GOES satellites to provide coverage of the Western Hemisphere, including the U.S. territories in the Pacific. This visualization uses a variety of datasets from GOES to demonstrate the versatility and importance of these satellites.”

…from the Geelong Advertiser…

“Up to 6600 Geelong homes will be under water if a frightening climate change forecast comes true … and there’s nothing you can do about it.

GIS and Science
Blog at WordPress.com.